Fuchu Post Town. Discovery of a vibrant culture dating back 2,000 years at Toro, in modern-day Shizuoka City, was a morale boost to Japanese struggling with post-World War 2 defeat. The site was first uncovered accidentally during military construction in 1943, with proper archaeological survey having to wait until 1947.

The Toro site shows the merging of Japan’s original, indigenous Pacific island lifestyle with new technologies from China about 2,000 years ago. Wooden rice storage buildings, on elevated stilts to keep out vermin, are highly reminiscent of food storage structures found in modern-times throughout the Pacific islands as far away as Polynesia. But wet-paddy rice cultivation would have been a relatively recent introduction from China, allowing vast improvements in agricultural production and therefore societal development. Toro also shows that Late Yayoi Period, around 3rd century AD, was the end of Japan’s Stone Age as iron implements were also introduced from China, further boosting productivity.

This fascinating ancient history would have been unknown to Tokugawa Ieyasu, Japan’s most famous Shogun and founder of the Edo Period in the early 17th century. In his lifetime Ieyasu ranged extensively across Japan and beyond, firstly assisting Osaka’s Toyotomi Hideyoshi in uniting a country long divided during the Warring States Period and his subsequent attack on Korea, and then in defeating Hideyoshi’s successors after his death and establishing a new capital in Edo, now Tokyo.

But Ieyasu’s life-long base was Sunpu Castle in modern Shizuoka City, just a few kilometers from the then long forgotten Toro site. Sunpu Castle was originally built in 1337 by the Imagawa clan. Ieyasu first lived there from 1549 when he was taken into the care of the Imagawas. Towards the end of his eventful life and after setting up his son Hidetatsu as the second Edo Shogun in the capital, Ieyasu retired to Sunpu and subsequently passed away here in 1616 at the age of 75.

Sunpu Castle site remains as a park in the center of Shizuoka City. You can get a great view of the site from the viewing platform on the top floor of the neighboring Shizuoka Prefectural Office Annex Building. The castle outer walls line the main streets of modern Shizuoka. Unfortunately there is nothing left of the original castle buildings themselves. Made of wood, they were destroyed in a 17th century fire. But the East Gate was reconstructed in 1996 to original specifications. You can enjoy the rich odor of the hinoki timber as though it was only sawn yesterday, and some impressive beams made from entire chunky tree trunks.

Ironically, just outside the medieval castle walls is the spot where in 1868 Saigo Takamori plotted with fellow conspirators the overthrow of Edo Shogunate and establishment of the Meiji Period. Then, after ousting the last Shogun (Tokugawa Yoshinobu) from Edo Castle, Saigo sent him to reside in Fugetsuro, near present day Shizuoka Station. 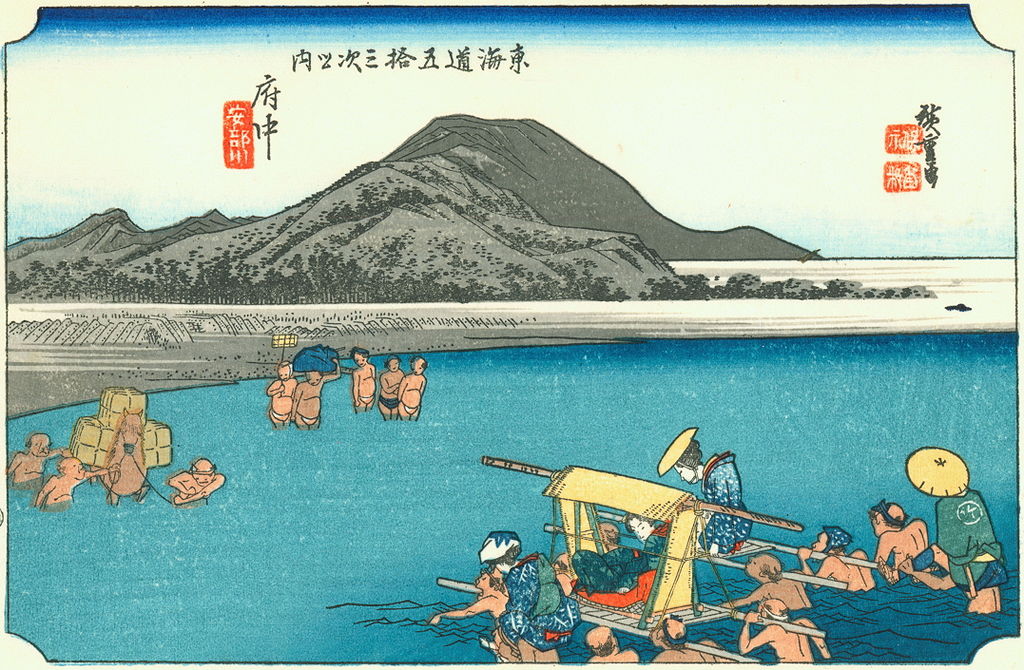 Toro, Sunpu Castle, Fugetsuro and modern-day Shizuoka City all bathe in the gaze of Mt Fuji. Japan’s noble icon, which marks the collision zone of the Philippines tectonic plate with mainland Honshu, is only about 10,000 years old itself in current form. If Fuji could talk what tales it could share of the big role played by Sunpu in the rise of Japan.