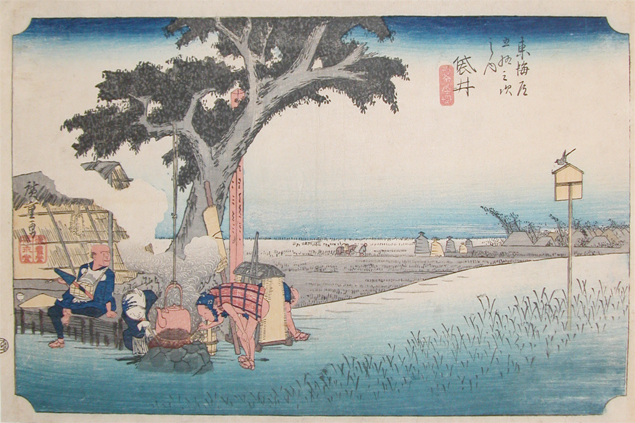 Smack bang in the middle of the Tokaido, is literally how Fukuroi locals describe their town in Japanese. Even in the Edo Period, Fukuroi was quite close to the previous station, #26 Kakegawa, so was used more as a cup of tea stop than as an overnighter. Hiroshige catches that feeling admirably. He also catches a peaceful looking beach setting behind the tea house, but this is his imagination working overtime. The Tokaido at Fukuroi is quite a distance from the coast and there is no way you can see the sea.

Could the coastline have been closer in the 19C? No. There are actually hills separating Tokaido from the coast at Fukuroi, and in those hills is the centuries old Hattasan Temple. It’s a pretty, reflective spot and visited by hoards at important times of the year like New Year and also during the mid-summer festival for ancestors (obon) to administer the appropriate prays. A kilometre stretch of towering ancient Japanese ceder (Cryptomera japonica) line the walk from the carpark up to the temple.

In a striking contrast of the ancient and ultra-modern that is so Japanese, nearby Hattasan Temple, set in the same hills, is Ecopa Stadium, which will host four games during the 2019 Rugby World Cup. Scotland, Ireland, Australia, South Africa, Italy, Georgia, and Japan will all play in this 40,000 capacity stadium, built in 2002 for the Football World Cup. Fukuroi Festival takes place annually in October, so will provide extra entertainment for rugby revellers from Australia and Scotland who will be in town to see games around that time. The local station for the stadium is called Aino (pronounced ‘I know’), and is in between Kakegawa station and Fukuroi stations. There is no ticket vending machine at Aino, presumably to assist crowd control as tens of thousands all pile into the little station at once following a match. So when you reach your destination, just tell the guard at that station you got on at Aino and pay the appropriate fare there.

Fukuroi City is working to preserve and recreate the Tokaido running through their precinct. A little tea house was set up in 2000 in the style of that in Hiroshige’s painting.

Fukuroi is not included in the standard Hakone Hachiri Tour, however customised tours can be arranged on request. tonyeveritt@tokaido.blog

One thought on “Fukuroi, Smack Bang in the Middle of Tokaido”