Nissaka and Kanaya. Kawazakaya Inn, one of the few remaining original Edo Period inns (shukuba) on the Tokaido is at Nissaka, about a 20 minute drive east from the Shinkansen station at Kakegawa. You can enter and enjoy looking around this recently renovated building, constructed in 1852 after a fire destroyed most of the buildings in the post town. If you are really lucky one of the volunteer guides on duty might sing for you one of the songs of Tokaido travellers, as they puffed their way over the tough Pass which is so vividly captured in Hiroshige’s print. 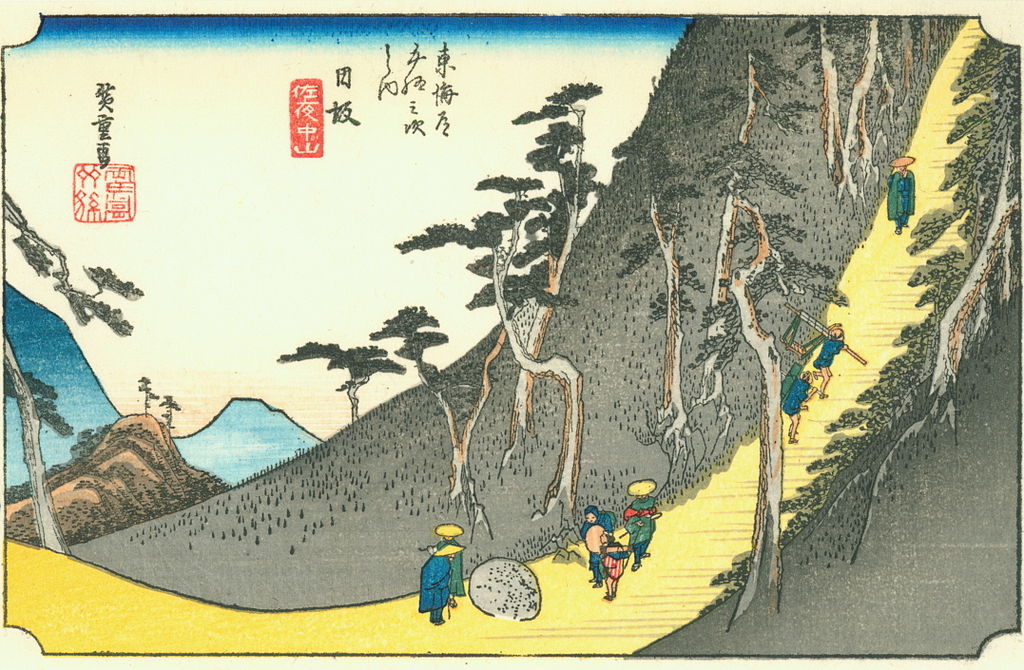 In 1615 a samurai named Yochiro Ota, who had been seriously wounded in the Winter and Summer Osaka Castle Seiges, took up residence in this post town of Nissaka. Kawazakaya Inn was founded by one of his descendents, Jiemon Saito, in 18C.  Kawazakaya Inn was frequented by high level Edo administrators, evidenced by use of Japanese cypress (hinoki) wood materials in construction, usually prohibited by the Government of the day for common use. The Inn remained as the house of the Saito family until 1993.

A delightful teahouse in the Inn garden was originally built in 1805 and relocated to Kawazakaya Inn in 1840. It was then temporarilly removed in 1995 to make way for construction of a new bypass for Tomei (literally meaning ‘Tokyo-Nagoya’) Freeway. The teahouse was moved back to its current location in the garden in 2003. The modern Tomei  Freeway zooms past at close quarters, a reminder of the spirit of Tokaido.

A private gallery at Nissaka displays some rare ukiyoe prints, including some of Hokusai’s 53 Stations of Tokaido series painted a generation before Hiroshige.  The young Hokusai focusses on people in his Tokaido prints, in contrast to Hiroshige’s portrayal of people in the landscape. The young Hokusai takes a more classical approach to this early Tokaido series, a stark contrast to his fascination with geometry that dominates his most famous Fuji series (including The Great Wave) painted in the sunset years of his life.

‘Gold Valley’ is the literal meaning of Kanaya, and it has as pleasant an atmosphere as its name suggests.